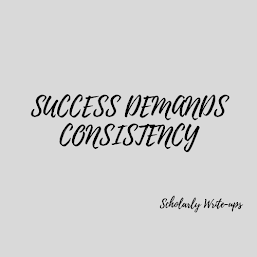 ‘IF YOU WANT TO ACHIEVE SUCCESS, REMEMBER MY FRIEND THAT CONSISTENCY IS THE ONLY KEY’

There is no shortcut to success. Success follows you after years of continuous struggle. First, you have to get through the most demanding test of your determination, perseverance, and consistency, and then you will reach your most cherished and dreamed destination.

Whenever I read or listen to the success-story of any successful person, one major aspect of his/her whole journey to success remained his consistency and perseverance.

Every successful person today was a symbol of failure in the past. He struggled when no one cared about his physical presence in the world. But, he never gave up. He remained adamant in the face of failures and defeats. He bounced back every time he got knocked down. But, he pushed himself harder when the winds were blowing in the opposite direction. People made fun of him, he continued. Circumstances were not in his favor, he didn’t lose hope. After a never-ending phase of testing time, finally, the sun shone at him through the dark clouds.

Almost every famous book is comprised of a minimum of 250 pages. Ever wondered how the author managed to complete such a lengthy book that’s each and every word hooks the attention of a reader? Indeed, it was his consistency and determination that finally made it possible. 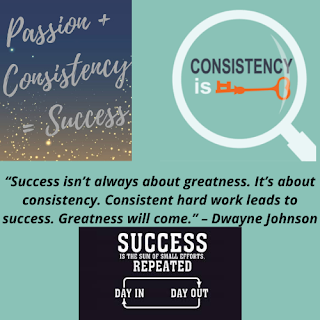 Consistency is Required no matter what you DO!

We are living in a technological era. We know many famous bloggers, vloggers, public speakers, influencers, etc. Every successful blogger or vlogger of today was an unknown person once who created content but nobody cared; who continued making painstaking efforts, but his content never found the audience. At times, he felt so depressed and felt like giving-up while things were not working the way he imagined. But, he never gave up. He kept on pushing himself forward. As great things take time; eventually his efforts started to pay off. He began to rise like a star. Finally, he became a public icon with a large number of followers around the world. Today, people ask for his time, but he does not have time for them. This is why we say that ‘consistency is the key to success’.

People who remained consistent in their efforts achieved success

Take the example of Thomas Edison who invented the electric bulb. Edison made 1,000 unsuccessful attempts at inventing the light bulb. It was his consistency that ultimately led him to success. 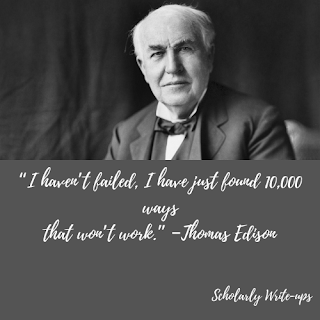 Jack Ma, the founder of Ali Baba, faced a number of failures in his life, but remained consistent with his struggles and efforts and finally became a successful tycoon.

During his childhood, Jack Ma failed twice in his Primary School examinations, thrice during his Middle School exams; when applying to universities, he failed the entrance exams thrice. He even applied and wrote to Harvard University ten times about being admitted – and got rejected each time.

After spending three years to get into a University, Jack failed to get a job even after applying to them 30 times. In an interview, he once said “When KFC came to China, 24 people went for the job.  Twenty-three people were accepted.  I was the only guy who wasn’t.” He was also among the five applicants to a job in the police, and was the only one getting rejected after being told, “No, you’re no good.”

Also, on his Entrepreneurial undertakings, Jack Ma went on to fail on two of his initial ventures. But that didn’t stop him in any way from dreaming bigger. 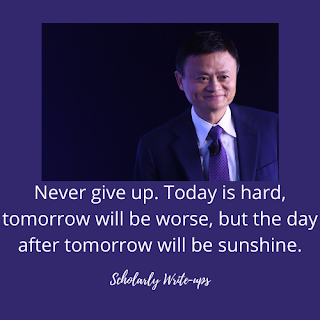 Jack Ma never gave up. He took his failures as opportunities to learn. The same person today runs one of the biggest E-commerce networks in the world.

Similarly, all the greatest inventions in the world were made possible due to the consistent efforts of mankind. Flying buses, ships, automobiles, cellular phones, internet services, advancement in technology, etc. nothing could have been achieved without consistency, unshakable resolve, willpower, and determination of mankind.

Even the last Prophet (PBUH) of Islam set an ideal example of consistency, persistence, determination, struggle, and unshakable resolve.  During his life, he faced multiple hardships and challenges, but he remained consistent in preaching the true message of Allah (the only God), which ultimately led him to the biggest success. His consistent struggles gave us a clear message that consistency is the key to success.

What do we learn from the whole discussion?

Set your goals and keep struggling with consistency unless you achieve them. Be in control of your life. Take small steps daily towards the destination. Remember! You will face hardships, problems, failures, rejections, dejections; never give up. People will make fun of you; never give up. At times, you will feel unbearable pain in your efforts, your pain will become your strength in the future; never give up. There is no shortcut to success; the only key is consistent efforts.

So, Be Consistent and Invincible!!!

Spread the love
About admin 126 Articles
The admin chose to be incognito. He is a curious mind and a passionate writer. Also, a bibliophile, a gamer, a teacher, and a learner. He tries to stay updated on everything happening around the world!