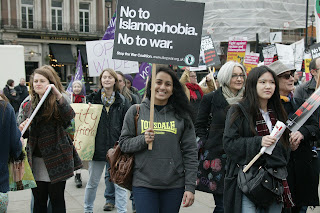 In his address to the 75th session of the United Nations General Assembly, the very mention of the term ‘Islamophobia’ by the Prime Minister of Pakistan Imran Khan took me back to the year 2012 when I met an American lady who had embraced Islam, erstwhile Christian, in the year 2006. Her story is really interesting. So I thought to share that with you.

She told me that she was the only person in the family who is Muslim. Else, her children, and everyone else were Christian. She further told me that her conversion to Islam brought a plethora of miseries and challenges to her. To name a few; she got divorced soon after embracing Islam. Apart from her children, no one else in the family gives a hoot about her life and her presence around anymore.

Moreover, she had lost her job soon afterward. She is mocked whenever she prays or listens to the Qur’an. However, she understands that all this is a test of her determination and perseverance.

But the interesting part of her story is yet to come.

When I inquired about the factors, reasons, and motivations that prompted her to accept Islam; she told me that she was once Islamophobic to the hilt. That was because of the narrative built up around the globe soon after the 9/11 attacks on the world trade center that ‘Muslims are terrorists’.

It was then that she decided to know more about Muslims. She started doing research and study on the origin and spread of Islam, the social, political, and economic life of Muslims, the treatment of women in Muslim societies, the life of the Prophet PBUH, and His conduct with men, women, and children, etc. Moreover, she had started talking/chatting to Muslims from different countries via social media to know more about Muslims.

Ironically, she had started to know about Islam in the first place because she was terrified of Muslims; but she ended up embracing Islam after studying it deeply and thoroughly.

She changed her name to Khadijah (the first wife of the Holy Prophet PBUH).

This is the beauty of Islam. It attracts and embraces the one who seeks guidance (Hidayat).

Islamophobia is defined as the fear of, hatred towards or prejudice against the Muslims. In the modern-day world, the causes and roots of the Islamophobia can be traced back to the 9/11 incidents and following events such as the American led war on terror against the Taliban and the rise of many terrorists organizations and incidents.

A baseless belief that Islam promotes violence and terrorism and the followers of Islam are thus terrorists made those people Islamophobic who know nothing about Islam as can be seen in the story narrated above.

Moreover, foreign electronic and print media are directly involved in spreading Islamophobia among the masses as a ruse to defame Islam and Muslims.

The actual problem lies in the fact when the world labels terrorists as Muslims. Actually, it is the Muslim world that remained a target of terrorism, suicide attacks, and bloodshed. The widespread terrorist attacks after Pakistan’s involvement in the war against terror have directly hit Pakistan and its people who are Muslims.

The following are some prominent incidents that are utterly based on unjustified hatred, prejudice, and bigotry against Muslims.

In the year 2018, after shutting down seven Turkish mosques, Astria expelled forty Turk Imams from the country.

Besides, in 2018,  during European polls in order to garner more votes, Marco de Wit, a candidate from the Finnish People First party in Finland publicly desecrated the Holy Qur’an.

Moreover, in August of the same year, in Denmark, the Danish parliament passed legislation that made full-face veil a crime.

In November 2019, a young Muslim boy foiled an attempt to publicly desecrating a copy of the Holy Quran in an anti-Islam rally in Norway.

Moreover, France is deeply involved at the state level in its anti-Islamic activities. The state of France has fully backed the blasphemy committed by its individuals under the garb of freedom of speech.

Recently, the French president Emmanuel Macron has passed derogatory remarks on Islam. Moreover, he has fully backed the blasphemous sketches of the Prophet Muhammad (PBUH) and the display of caricatures on government buildings.

It is the same country that banned the wearing of veils by Muslim women in public places in 2011.

Moreover, in January 2020, a French girl Mila came live on her Instagram handle and openly spewed venom against Islam, calling it a ‘religion of hate’. Though she was largely criticized throughout the world, the French president Emmanuel Macron has defended her by insisting that ‘blasphemy is no crime’.

Before getting into detail, first, we need to know who the Muslims actually are. A person, who follows Islam, is called a Muslim. The word ‘Islam’ means peace and peace is the essence of Islam.

Muslims seek guidance from Qur’an. Qur’an is the Holy Book revealed by Allah Almighty for Muslims and it is a source of instructions and injunctions. If anyone wishes to know about Islam, he must read Qur’an instead of attributing the terrorists and extremist activities of a few terrorists organizations to Islam.

Spreading violence or killing any innocent is against the injunctions of the Qur’an.  In Qur’an, Allah says:

Because of that, We decreed upon the Children of Israel that whoever kills a soul unless for a soul or for corruption [done] in the land – it is as if he had slain mankind entirely. And whoever saves one – it is as if he had saved mankind entirely. And our messengers had certainly come to them with clear proofs. Then indeed many of them, [even] after that, throughout the land, were transgressors.

Thus, this Quranic verse throws into the sharp relief that there is no connection between Islamic instructions and terrorist activities.

Moreover, in the words of the Prophet Muhammad (SAW), mentioned in the Hadith collections of Tirmidhi and Nasai: “A true believer (mumin) is he from whom people’s lives and wealth are safe.”

In simple words, terrorists are not Muslims and no religion promotes terrorism.

Furthermore, linking Islam or Muslims with terrorism is an unfounded belief because it is the Muslims who are the target of rampant violence and terrorism in today’s world.

In Afghanistan, thousands of Muslims were killed during a two-decade-long war against terrorism. In Pakistan, around 70,000 people laid their life due to terrorist attacks. In Indian Illegally Occupied Kashmir and in India itself, Muslims are being persecuted and the perpetrators go scot-free under the patronage of the state. In Palestine, Israeli illegal occupation and the unrelenting use of force against unarmed Arab Muslims and Palestinians are the worst examples of terrorism. Apart from these, the situation of Iraq, Syria, and Lebanon is not hidden. The pogrom carried out against Myanmar Muslims with impunity is among those despicable acts of terrorism that remained neglected by the global community till the present.

Today, the offensive acts of desecrating the Qur’an by burning it and making caricatures of the Prophet PBUH are widely employed tools for hurting the sentiments of the Muslims. These abhorrent acts are performed under the garb of freedom of speech. These acts are met with resistance from the Muslims. Ultimately the reactions are labeled as extremism that is utterly unjustified.

To conclude, Islam is the religion of love and peace. It promotes tolerance, patience, love, peace, cooperation, understanding, etc. Islamic teachings and instructions aimed at the formation of a just and peaceful society. The falsely propagated image of Islam and Muslims cannot change the actual reality of Islam.