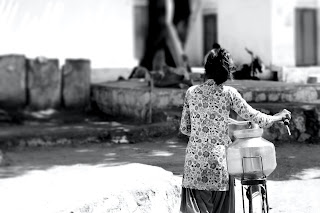 As Pakistan is lagging behind most of the countries with respect to various development indicators, one reason that is often cited as the main factor behind such state of affairs is the lack of participation of Pakistani women in the economy and development.

What Quaid has said in this regard further corroborates the above-mentioned factor:

“No nation can ever be worthy of its existence that cannot take its women along with the men. No struggle can ever succeed without women participating side by side with men. There are two powers in the world; one is the sword and the other is the pen. There are great competition and rivalry between the two. There is a third power stronger than both, that of the women.”

In all the developed countries in the world, women are working side by side the men. Thus, these two wheels of the cart keep the cart moving. In the case of Pakistan, the cart is being driven with the help of one wheel only, while the other crucial wheel is totally missing. In this article, we will objectively analyze the potential factors that are impeding women’s participation.

A lot of literature has already been published on women status and conditions in Pakistan. However, we will have a quick insight to present women status in Pakistan before shifting to the objective analysis of the factors and reasons involved.

A Glimpse at Women Situation in Pakistan

Though the situation is improving day by day because of an increase in awareness among masses, but the status of Pakistani women are still not enviable.

According to Statista, out of a total 59 per cent literacy rate in Pakistan, women literacy rate stands at a mere 47 per cent. Moreover, women representation in the work field is abysmally low, constituting a mere 24 per cent of the labour force. Confined to the domestic sphere, a great number of women is economically dependent on men.

Women’s participation in the Criminal Justice System of Pakistan is very meagre. Only 2 per cent of women constitute the total police force of Pakistan. According to the National Police Bureau (NBP), out of a total of 4 lac police personnel in Pakistan, women are only 6000.

There is a lack of women prosecutors and judges in Pakistan’s judicial system. It is a well-documented fact that women victims and litigants are mistreated in police stations. These facts underpin why women usually lack trust in the Pakistani justice system. Thus, most of the cases pertaining to gender-based violence go unreported.

Apart from the formal justice system, a parallel system of panchayat and Jirga also perpetuates injustice against women in Pakistan. Their verdicts are mostly biased and anti-women. For instance, most of the family feud cases are resolved through the forced marriage of girls from one family with the other party/family involved in the case. Another example is the case of Mukhtaran Mai, who was gang-raped in June 2002 on the orders of a tribal panchayat.

Why Pakistani women are marginalized, oppressed and subjugated? The answers are given by different feminists’ schools of thought. Here, we will analyze the status of Pakistani women with the help of these feminists’ perspectives.

Some scholars have identified the reason behind the oppression of women, particularly in Pakistan and generally in every society from a liberal feminist’s perspective. This perspective views inequality faced by women as a direct result of a society that views women as unequal to men. This helps in understanding why all the prominent positions in the country are mostly occupied by the men. Why women quota is kept so low.

The Liberal feminists identify the solution in the making of the laws that would mandate equal treatment on the basis of sex.

Radical feminists identify patriarchy as the root cause of all women troubles. The institutional arrangements in a patriarchal society enforce male privilege. In Pakistan, patriarchy has confined women to the domestic sphere dealing with unpaid domestic works while men work in the public sphere where they get paid for their work. Such economic deprivation and dependency lead to the subjugation of women.

Radical feminists see the solution in replacing patriarchy with matriarchy.

Marxist feminists observe capitalism as the major factor of women oppression and exploitation in a society like Pakistan. According to Marxist feminists, capitalist society places women at disadvantaged positions where women are economically marginalized. Mostly, when capitalists require some extra labour, they hire women for the job. But, those women are paid less as compared to male labour. Thus, the capitalist system exploits women.

Marxist feminists call for the establishment of communism as a solution to the problem.

Socialist feminists point out that women are placed at the disadvantaged position due to two social structural conditions i.e. capitalism and patriarchy. They believe that women condition can be improved by uprooting both these societal structures.

Third-wave feminists highlight the fact that not all women are equally oppressed and disadvantaged. These feminists point out that some women are more troubled than others. This disparity in conditions differs across the classes, races and socio-economic status of women in Pakistan. That means the women belonging to an elite class are better and privileged than the women of middle-class. Similarly, lower-class women are more oppressed than middle-class women. Women with different socio-economic backgrounds receive different treatments in Pakistani society.